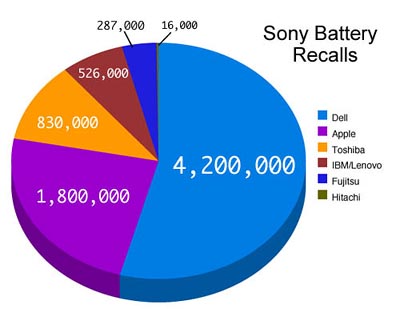 By now, just about everyone knows about the whole flaming battery fiasco. What’s interesting is that no Sony Vaio notebook has been recalled (yet), despite the fact that they are the creators of all these exploding batteries.

To date, nearly eight million units have been recalled, the lion’s share belonging to Dell (4.2 million, the largest recell in the company’s history). Other significant sufferers include Apple, Toshiba, and Fujitsu. There have been exploding batteries in public places, laptops being banned on Qantas and Korean Air flights, but few (if any) reported injuries. Sigh. I hope fuel cells are safer. And to think, Sony could have prevented this whole thing.