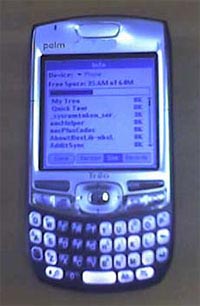 No details have been confirmed yet, per se, but the folks at Palm are set to announce a new QWERTY’d-out Treo (or two, or three) for us tomorrow. There’s a significant possibility that this new batch of PDA phones will include the entry-level Treo 680 (codenamed Nitro during development), a slight step up from the 650, without being quite as powerful as the 700-series. As a refresher, the 680 will run on Palm OS 5.4, sport 64MB of memory, SD expansion, and a VGA camera.