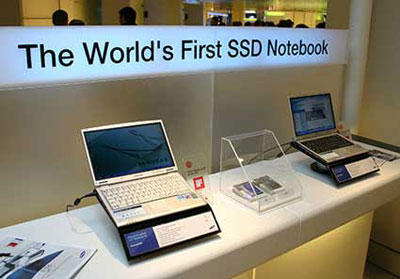 Samsung is already heading down the road to a Flash-based hard drive. In fact, they have a product to prove it.

The Korean electronics giant has come out with the Q30SSD, a notebook that features a solid state hard drive built on Flash technology. According Samsung, the super-light Flash drive reads 300 percent faster and writes 150 percent faster than conventional spinning-round-the-clock hard drives.

The Q30SSD has 32GB of storage capacity and a rather hefty initial price tag of US$3,700. Still, it’s the first of its kind and definitely something that will be popular with users who want their machines to emit no noise whatsoever (except for the key-tapping sounds that they themselves create).