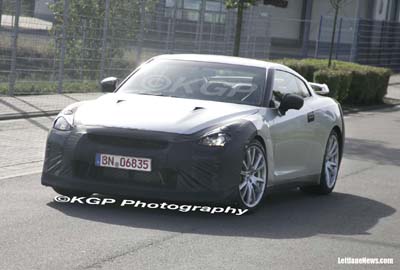 The Nissan Skyline GT-R is a legendary vehicle in Japan, known for its incredibly powerful engine and unique handling characteristics, twisting its way around mountain passes with the best of them. When they brought the Skyline to North America, it was rebadged as an Infiniti G35 coupe, losing some of its racing heritage and adopting some luxury. They’re shifting back, and believe me: it’s got to be for the better.

The 2008 Nissan GT-R is “80 to 90 percent” the same as the concept vehicle we saw during the 2005 auto show circuit. A close-to-production vehicle was seen hitting up the test track and we’ve got the spy shots for your drooling pleasure. If everything pans out as it should, we will soon be enjoying the 480 horses produced by the 3.2 liter twin turbo V6. That is, if you’re willing to drop $70K on this beast (they’ve apparently dumped the Skyline namesake). The Japan launch is scheduled for Fall 2007, with North America following suit in Spring ’08.