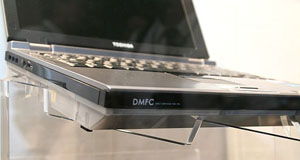 With all the bad news about exploding batteries, Toshiba is aiming to change the playing field a bit with a prototype of a fuel-cell battery for laptops.

The key word there is prototype. We aren’t near this reality yet, but we don’t seem to be far either, especially if the recall hits keep coming for Sony.

Toshiba says its fuel cell battery uses methanol to make hydrogen. Whether that’s an improvement remains to be seen. The prototype was seen, however, at CEATEC.