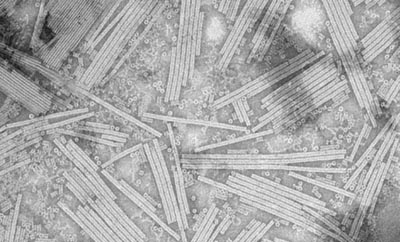 We swear we’re not making this up.

A group of UCLA scientists has co-opted a tobacco virus, coated it with platinum nanoparticles, and made it into a super-fly transistor that can conceivably leave Flash memory in the dust.

Just last week, we told you about viruses being used to make batteries. Now we have them making transistors. Why the sudden interest in viruses? Well, for one thing, they’re tiny, on the order of nanoparticles. For another, they’re organic. It’s not like these scientists are playing around with viruses that cause dangerous diseases.

So anyway, back to UCLA. The scientists “painted” groups of tobacco mosaic viruses with platinum nanoparticles and then plunked them into an electrode sandwich. The humans then zapped the resulting transistor-like device with some power and Voila!—the power comes on, courtesy of electron’s jumping from the bowels of the viruses to the surface. Once the zapping stops, the electrons go back below the surface and the device powers off.

The idea is to build up from the nano stages, creating a memory chip prototype that can one day replace Flash memory sticks.