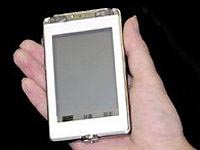 Sharp is expected to release a high tech portable translator by the end of the year. The small handheld device can translate spoken English into spoken Japanese and vice versa (presumably it will be capable of other languages as well). The device runs IBM speech recognition software that normally runs on PCs. It is similar to a devise called the Pharselator which the U.S. military has been using since 2003. The unnamed device is expected to cost about $500 when it is released.