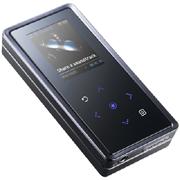 That slide-out speaker functionality is becoming a thing. That’s the case with Samsung’s latest media player, the YP-K5, which is now available for purchase. The player was first announced in August, followed by an ad campaign that kicked off last month targetting the iPod.

As a refresher, the speakers slide away when you don’t want them, leaving the YP-K5 in its very small natural size. Functions are accessed using the touchscreen, which has PC-like menus and allows you to choose a screensaver. Those MP3 files or radio tunes come out of the hidden speakers or into the included two-part ear buds. Download music or image files via an integrated USB port. Storage options are 2GB or 4GB.