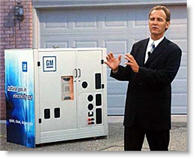 GM certainly is pursuing the H.

That would be hydrogen, and that would be alternative fueling for vehicles. America’s largest automaker is working on a hydrogen refueling station that you can park in your garage, according to a news report.

That report illustrates GM’s drive toward hydrogen and fuel cell use. A small number of refueling stations already exist, mostly in California, but GM’s home station would run on electricity or solar power.

The automaker also said it would have up to 100 Equinox SUVs that run on fuel cells within a year.

Not surprisingly, Honda has a home refueling unit in production as well.