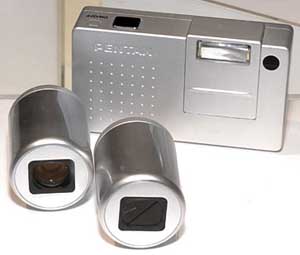 Interchangeable lenses in a DSLR? Pentax has that, sort of.

It’s called the X-Change, and it’s on display at the Photokina fair in Germany. It’s still just a great idea at this point and not a reality. Actually, it’s technology that’s four years old. And as you can tell from glancing at the photo, those bulky lenses have to be squashed quite a bit in order to fit inside the trendy slimness of a DSLR. Still, the idea that you can mix and match lenses that have integrated CCD image sensors is a tantalizing possibility.