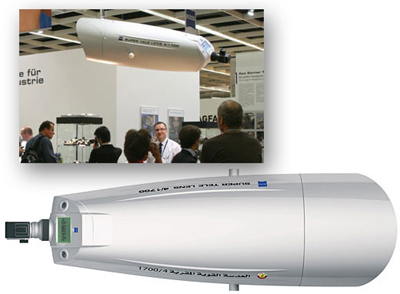 It was developed for a private customer who has very specific demands, and is the largest nonmilitary telephoto lens in the world. It’s 1700mm, or nearly 67 inches long. It shoots at f4, which required a whole new strategy of glassmaking, not to mention lens creation.

It weighs a staggering 564 pounds. The lens blanks themselves weigh more than 55 pounds. The finished lens has 15 optical elements in 13 groups.

That’s a whole lot of focusing power. We’re guessing that the camera is one-of-a-kind as well.

Other details, including pricing, are being kept under wraps.