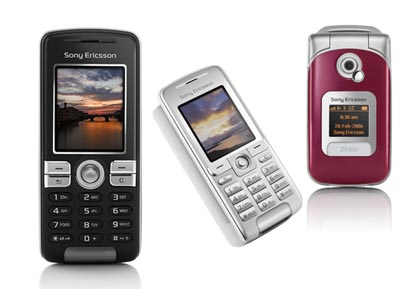 If those four sexy new phones announced earlier today are a little too rich for your blood, fret not. Sony Ericsson has three new entry-level handsets that will certainly satisfy the average user with their simple styling and camera-centric tendencies: the K510, K310, and Z530.

The K510 candybar — available in Midnight Black or Polished Purple) rocks a 1.3 megapixel camera with 4x digital zoom, as well as the option for a “true” camera flash (via the MXE-60). Other key features include an external antenna connector, Bluetooth, and 28MB of memory. A little further down the spectrum is the K310 with its blurtastic VGA camera, MP3 support, and 15 megs of memory.

Rounding out the three is the Z530 clamshell, the only phone of the bunch to sport expandable memory (via Memory Stick Micro up to 1GB). The VGA camera with 4x digital zoom won’t wow you, nor will its USB 2.0 connectivity, but the full HTML browser is a definite plus.