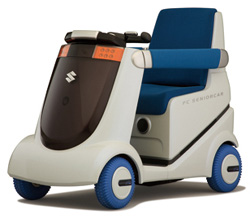 All fuel cell vehicles are not just cars. Some of them are wheelchairs.

Suzuki Motors has produced the MIO, a motor-driven cart that approximates a wheelchair and is powered by a methanol cell that is backed up by a lithium-ion battery. Rather than using a wheelchair, you can power your way around the house and the neighborhood in something that looks definitely more hip.

That cell requires four liters of methanol for a full tank, which gives you up to 25 miles of traffic. Given that you won’t be taking this one out on the highway, that’s probably several months’ worth of back-and-forth.

If you look closely at the photo, you can see the armrests double as barriers, and the handlebars are ergonomic. The LCD shows fuel level and power status. No word on whether it can be integrated with medical equipment.

Suzuki swears that this is just a prototype, but we think that they have something worth pursuing.