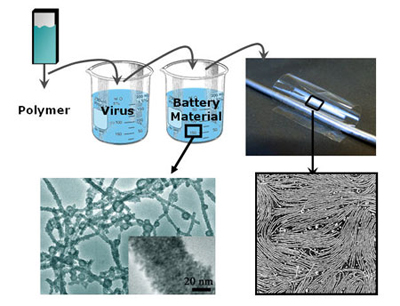 Remember, viruses can be good, too. That’s the case with a team of scientists at MIT, who have made viruses that put together battery components and pack them into tiny spaces.

It’s all rather spooky. See, the viruses wrap themselves in inorganic materials that they would normally avoid and form crystalline structures that are covered in gold for increased conductivity. That genetically engineered concoction results in an approximate electrode that resembles a piece of cellophane.

Angela Belcher, the spokesperson for the group, says they created the battery-generating viruses in order to streamline the battery-making process and restrict it to organic materials. Right now, they’re using lithium iron phosphate, preferring that to the carbon oxide that they used initially. The result could well be an organically produced battery that is compact, tiny, and ready to go. Belcher and her team anticipate a breakthrough in just a couple months.