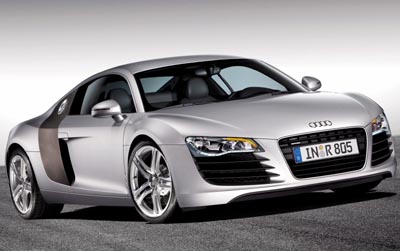 Tired of seeing the Lamborghini badge get all the attention, Audi has decided to create a supercar of their own. The 2008 Audi R8 has been officially unveiled, and it will surely be a big hit thanks to its powerful 420hp V8 engine (which is placed behind the driver) and all-wheel-drive layout. Based on the Lamborghini Gallardo platform, the R8 looks a little like a stretched out TT except with a Gallardo-inspired rear end.

You’ll get to choose from either LED or Xenon headlamps, and either a standard manual or an “automated manual” gearbox, though the LEDs lighting up the engine bay come standard. With a claimed 0-62mph time of just 4.6 seconds, the Audi R8 is expected to sell for between $80K and $110K when it ships in the first half of next year.

For pictures of the R8 taken from every which way, hit up Leftlane News.