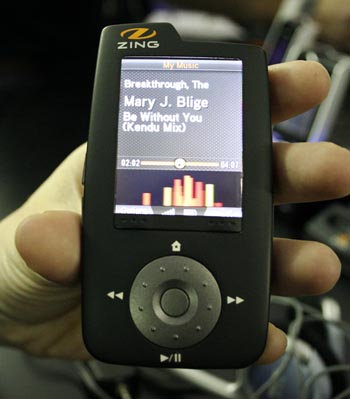 The next big thing in the portable music player market appears to be WiFi connectivity, with the Sirius Stiletto and Microsoft Zune both packing wireless capabilities. While not yet officially announced, the Zing Music Player is attacking the same market as the Stiletto. It’s smaller than its competitor, but still uses WiFi to download internet radio and Sirius. The downer is that it doesn’t have an integrated satellite receiver of its own.

The navigational wheel is eerily reminiscent of Apple, but it doesn’t have that cool touch wheel interface. The editors at Gizmodo were particularly impressed with the menu system, however, when they had a chance to fiddle with the Zing at DEMO.