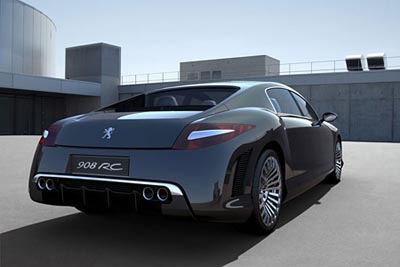 Early last month, we reported on the Peugeot 908RC, a full-sized luxury sedan boasting a “monstrous” diesel V12 powerplant good for 700 horsepower and 885 lbs-ft of torque. The French car maker has now released a couple of promotional videos for the super aerodynamic 908 RC concept, and if I do say so myself, it looks pretty damn sexy.

As you can tell from the pictures, this car was designed with aerodynamics in mind. The long sloping hood, windshield, and roof ensure that the 908 RC can cut through the air like a fighter jet. In fact, the first vid demonstrates this by putting the beast through a wind tunnel.

Check out the two videos through the link below.