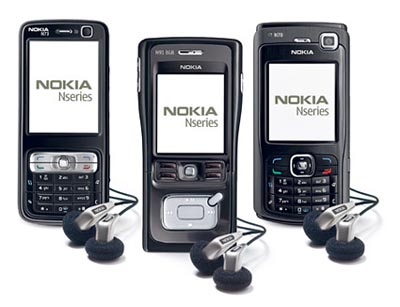 The world’s largest phonemaker has been pretty busy as of late. They had a whole army of music-minded accessories yesterday and the fantastic N95 super slider, now they’ve announced some new variants to three of their popular N-series handheld multimedia computers (read: media-centric cell phones). The N70, N73, and N91 are getting the “Music Edition” treatment, emphasizing their MP3/AAC playing capabilities. The N91 gets an upgrade to 8 gigabytes of on-board storage, whereas the N70 and N73 simply get bundled with some extra memory cards (1GB and 2GB, respectively). All three phones now come in sleek black suits and offer standard 3.5mm audio connections thanks to an included Pop-Port adapter.

The Nokia N70 Music Edition and N73 Music Edition are both expected to ship next month for 350 and 450 Euros, whereas the N91 8GB will hit shelves before year’s end for about 550 Euros.