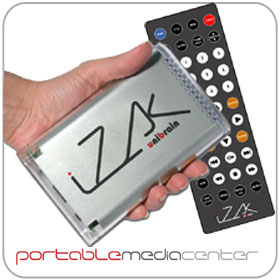 You have your Muzak, you store it on an iZak.

The iZak comes with a remote, which triggers an on-screen menu that looks suspiciously like a TiVO product. What you actually store on the device is up to you. It accepts audio and video and plain old data files. Like we said, it’s a hard drive. Storage capacity varies by model, with the range going from 40GB to 100GB, with an 80GB model thrown in there for good measure.

Some specifics: Audio acceptables include MP#, WAV, WMA, AAC, and AC3. Video capables are NTSC and PAL and even DivX, via an S-Video cable.