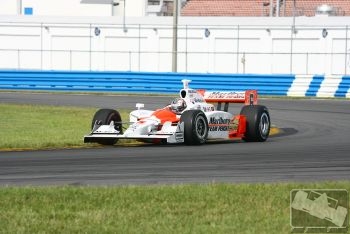 Ethanol in an IndyCar? It happened, earlier this week.

A Honda 3.5-liter V-8 racing engine running on 100-percent ethanol powered two racing cars around the track at Daytona International Speedway on Tuesday in Daytona Beach, Fla. Former IndyCar series champions Sam Hornish Jr. and Tony Kanaan volunteered for the tests and reported absolutely nothing out of the ordinary after completing several laps, despite hotter than expected temperatures and higher than normal expectations.

Honda, of course, hopes to increase its visibility in the ethanol market. Whether the folks in the auto racing industry are behind them remains to be seen. The IndyCar Series has used a blend of 90 percent methanol and 10 percent ethanol this season. The tests were ostensibly a comparison of the mix being used now and the pure ethanol engine. No noticeable difference was reported.