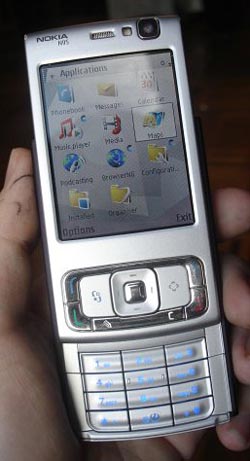 The Nokia N-series is being touted not as high-end cell phones, but rather as portable multimedia computers. With a spec sheet that reads like this, the N95 may be one of the best multimedia computers out there (at least those that can fit in your hand). They’ve mated an attractive dual-slider design with a knock-your-socks-off feature set that will have you drooling for hours on end.

Not only does it have an incredible 5 megapixel camera on board, but it’ll also throws down a full 150MB of internal memory, microSD expansion, integrated GPS, 802.11g WiFi, Bluetooth A2DP, HSDPA, a media player (naturally), and a 3.5mm audio jack for good measure. It won’t be the cheapest handset out there when it drops in Q1 2007, but at 550 Euros (US$700), it’s not the most expensive either.