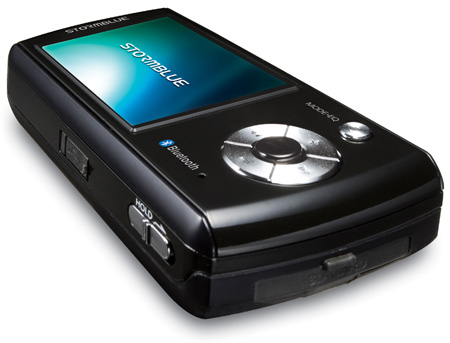 Here’s an idea whose time has come. It’s a DAP with Bluetooth.

Advanced MP3 Players, a U.K. operation, has released the StormBlue A9+. It’s a music player that recognizes audio files of various formats, including MP3, WMA, Ogg, and WMA DRM. You can use that Bluetooth functionality for FM radio as well.

It looks a bit like a phone but more like a portable recorder. Nonetheless, it allows Bluetooth connections to your mobile phone, for seamless audio file transfers.

Did we mention video? It does that as well, specializing in MPEG 4s but also able to convert WMVs, AVIs, and ASFs for viewing.

The battery is stacked, allowing a full 11 hours of video playback and an astounding 39 hours of music playback. (That would be the 4GB version. A 2GB version is also available.) And, the A9+ has a SD card slot, for even more memory.