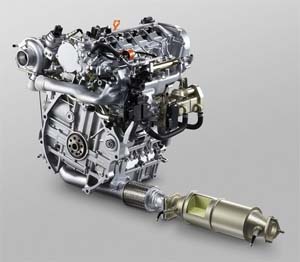 Honda, long a diesel holdout, is touting a new diesel powertrain featuring a two-layer catalytic converter that makes exhaust that is cleaner than gas-fueled cars.

Unlike traditional diesel engines, which give off high levels of nitrogen oxide, the Honda model will work hard to turn that NOx into just N. Diesel engines already get better gas mileage then straight-petrol models. The result, the automaker hopes, is a large entry into the U.S. auto market, perhaps as early as 2009.

The engine is still in the development stage, although it is late in that stage. Emission concerns and other details remain to be addressed.