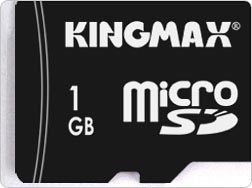 Up until now, we’ve been restricted to microSD cards that crawl along at a snail’s pace. Not anymore, exclaims Kingmax, because they’re releasing a high-speed microSD card that makes use of something called single-level cell (SLC) storage. Each cell only contains two power levels and as such, only contains one bit of data. This allows for speedier access compared to other microSD cards on the market that shove more than one bit per cell (which slows down the read/write process).

We’re still waiting on higher capacities, but given that microSD cards are smaller than fingernails, it may be a little while before the format can boast storage to rival its larger counterparts. Although Kingmax plans on shipping the high-speed 1GB microSD card before the month is through, they still haven’t set a price yet.