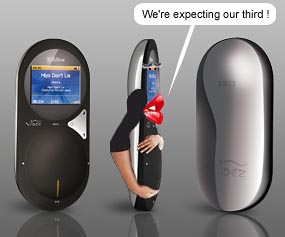 Its bulbous appearance may throw some of you off, but others may find its shapely curves attractive. The 8GB and 15GB versions of the Trekstor Vibez have been relatively well received, and now it seems the DAP maker is readying an intermediary in the form of a 12GB Vibez.

This move may result in a few puzzled looks, considering that they could have gone with a smaller capacity (and made use of solid state NAND flash memory) or a much bigger capacity (given that they have already taken the HDD route anyways). I’m not really sure what niche this new 12GB version is supposed to fill. After all, why wouldn’t you pony up the couple of extra doubloons to get a 15-gigger.