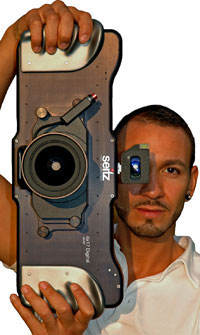 Seitz has a new digital camera which is not for your average user. It takes images that are 160 megapixels and take up about 1GB per shot. Storage of more than a couple of shots would be a challenge, so the camera sends the photos right to a specially configured Mac Mini via gigabit Ethernet. The camera has an ISO range from 500 to 10,000, a read-out speed of 300MB per second and a ridiculously fast shutter speed of 1/20,000th of a second. They’re not cheap cameras, either. The mobile version costs about $36,200, and the studio version runs about $33,700.