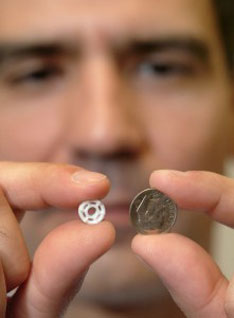 Mix living cells and electronics, put the mixture inside the human body, and you have a biosensor. That’s the idea behind research at the University of Rochester Medical Center.

The result is living chips that can wirelessly monitor patients in real time, looking for changes in physiology, including whether drugs or implanted devices are doing their jobs. Such technology should be music to the ears of diabetes patients, who are used to invasive procedures like monitoring insulin pumps.

The chips, who are made up in part of cells taken from the patient’s own body, also allow early detection of bodily changes, allowing faster medical treatment than is traditionally available. At first glance, the chips look rather small; the photo shows one to be smaller than a dime. That’s still rather large, however. We hope that future generations of these chips, which are now just prototypes, are a lot smaller.