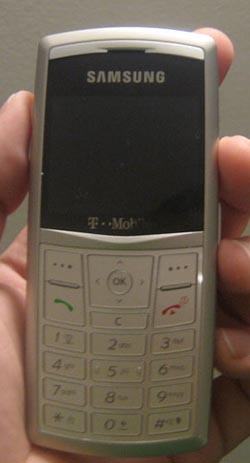 The Samsung Trace (a.k.a. SGH-T519) is supermodel chic: it’s among the skinniest things on this planet. Measuring just 0.3-inches thick, this slick candybar is being picked up by the folks at T-Mobile, not that you’d notice the weight difference on their shelf anyways. The Trace is feather-light (maybe even “flimsy”), but packs on some decent poundage when it comes to features.

It won’t blow you away, but you won’t be too disappointed with the spec sheet either, given that it boasts a better than VGA camera (1.3 megapixel), Bluetooth wireless technology, and an integrated music player to go with its microSD expansion slot. You’ll also be able to enjoy high-speed data thanks to its love for EDGE. Best of all, it’s reasonably priced at just under a Benjamin, after you go through the usual song and dance involving rebates and such.