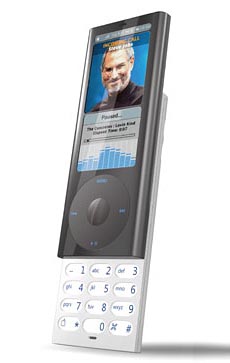 Another day, another unsubstantiated Apple iPhone rumour. Word on the blogosphere is that Steve Jobs will be taking the stage at Macworld in January to unveil the real Apple iPhone, and the internet will be abuzz just as it was with the announcement of the new Nano and Shuffle last week.

Other details surrounding the iPhone — unconfirmed, of course — include a 3 megapixel camera, 2.2-inch screen, iTunes integration (without the 100 song limit found on the Moto ROKR, for example), and a Nano-like form factor. It will apparently be made from “off-the-shelf parts” and there will be two additional models unveiled before the end of next year. Type of scratchy surface material used to encase the iPhone is still unknown.