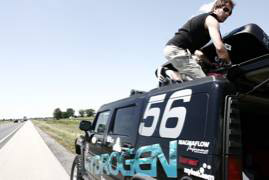 Can hydrogen power a Hummer? Apparently so, for thousands of miles.

Cyclone Energy brought a hydrogen-powered H2 to the Bullrun Rally, a cross-country endurance race. The Hummer had six 80-pound hydrogen tanks strapped into a cargo container on the roof, with a fuel line running straight into the modified engine. The only possible hitch was that the drivers had to jump up on the roof to switch tanks.

The hydrogen-powered H2 was a publicity venture for Cyclone Energy, which makes hydrogen kits for all kinds of American vehicles. The final report was a success, with rock-bottom emission levels. Translation: It finished the race squeaky-clean.