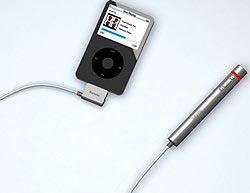 Ever wanted to make a demo tape to send off to top record executives, but just can’t afford the studio time? Ever wonder if you could make it as the next Kelly Clarkson? Wonder no more. Griffin is set to release a new accessory for the Apple iPod that removes the vocal track from your favourite songs and sends the instrumental to your stereo. The result: The iKaraoke.

They say that you can either send the voice-less music over via a line-in cable or using the FM receiver. No word on pricing, but we’re expecting versions for the iPod Mini, 4G, 1G Nano, 5G Video, 2G Nano, and 5.5G Video to be hit the market this Winter.