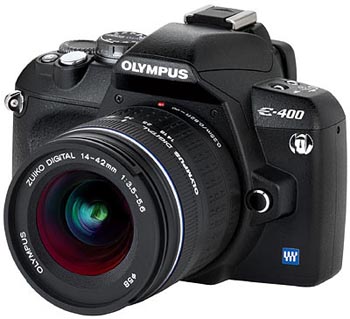 Take that Canon. Olympus is a pretty big dog in the digital photography yard, but their latest offering — the E-400 — is being touted as “the world’s smallest and lightest 10 megapixel Digital SLR”. More specifically, the body weighs a mere 380 grams (that’s just a touch over half a pound, folks) and measures 129.5mm x 91mm x 53mm.

Keeping with the “everything is tiny and light” mantra, Olympus is pairing this release with a couple of new (small) lenses as well: a Zuiko Digital 14-42mm 1:3.5-5.6 and a Zuiko Digital 40-150mm 1:4-5.6 ED. I’m not much of a professional picture taker, so I’ll leave it up to you to decipher what those numbers mean (sorry, I’m a point-and-shooter).

Previewing and reviewing your shots works quite well on the 2.5-inch LCD. Other key features include an anti-dust sensor, up to 3fps with a five image RAW buffer in burst mode shooting, ISO 100-1600, 95% frame coverage, and compatibility with the Four Thirds Standard. You can either stash your photos on xD or CF memory cards.

Expect the Olympus E-400 DSLR to hit the streets of London (and the rest of Europe) in November. No word on pricing.