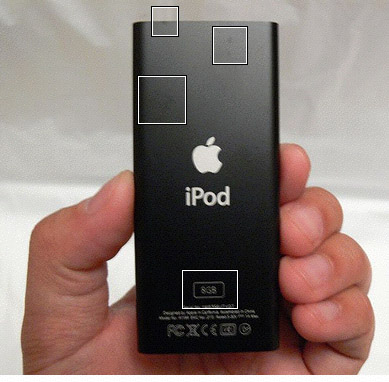 The rush is on to buy the new iPods. We reported on the remastered iPod family recently, and the sales forecasts look to be good on these digitally remastered members of the Apple MP3 player family.

Not so fast, cry some users …

Seems some folks have found blemishes on the surface that just won’t come off. The idea behind buying a new device is that you’ll be getting something straight out of the factory, whether that factory is in Mountain View or China or Timbuktu. And you expect that new device to be blemish-free. According to a few folks, that’s not the case with the new iPods.

Other users say that dust is getting inside the tiny particles that make up the iPod’s finish and creating an uneven color. Nothing like a smudge to ruin the sheen of a shiny nano.

You’ll remember that a problem with the nano has been its propensity to get—and stay—scratched. This comes from normal wear and tear. Older versions of the iPod didn’t have this problem because they didn’t have the same kind of surface. The nano, with its shiny surface, is more prone to scratching and blemishing and other kinds of defacing. You can always buy a case for it, but that kind of defeats the point of being able to see your reflection in the shiny surface.