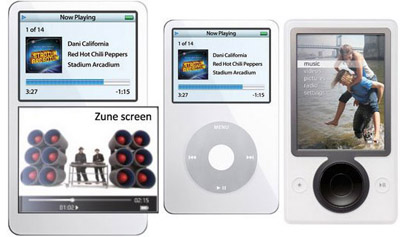 So much for marketing.

Some astute folks put an iPod and a Zune side-by-side to see if those Microsoft claims of physical and digital superiority could be substantiated. Turns out that it’s all positive spin.

The Zune is exciting to many people because of the music sharing element, but looks can be deceiving. For example, if you look at the Zune in the new ads, it looks like it’s resolution is a lot better than an iPod’s. Well, they have the same old 4:3, which equates to 320×240. PhotoShop can do wonders, remember.

There’s also that little bit about the size of the devices. Microsoft wants you to believe that the Zune is a lot bigger than the iPod. Not so. The Zune is a few centimeters taller. If it looks taller and thinner, then we refer you back to the PhotoShop explanation.

There’s truth, and then there’s advertising.