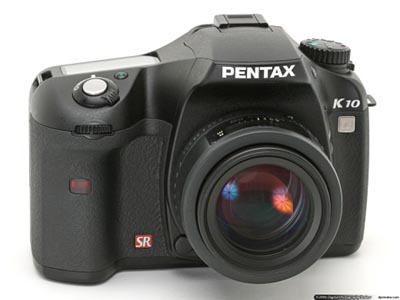 Pentax is on a releasing spree, first with the point-and-shoot Optio T20 and now with the 10.2MP K10D digital SLR, complete with built-in image stabilization. I like how it’s not overly bulky, but it easily holds its own against giants in the segment, like the Canon Digital Rebel XTi.

One problem that plagues many picture takers is dust obscuring otherwise brilliant photos. Pentax has addressed this issue by implemented a vibrating CCD system that will remove said debris (Canon’s got that too). Further dust protection comes from its 72 seals.

The image stabilization system found on board will shift the imaging sensor in X, Y, and rotational directions, all without the need of a dedicated lens. Other key features include a 2.5-inch preview LCD, 11-point autofocus, magnesium body, and ISO ratings up to 1600.

Like the T20, the K10D is expected to ship next month. The body alone will run you $799, with extras like lenses and such adding to that price.