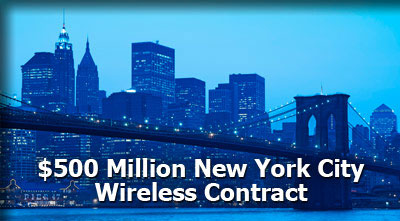 The city of New York is building a massive wireless network so that emergency services can always be connected, and they have chosen a defense contractor to build it. Northrop Grumman Corp. has been awarded a $500 million contract to build a network which will allow police and firefighters to access city computer systems wherever they are. The system is expected to be operational by the spring of 2008, but it will take up to five years for all of the radio antennas, which will allow the system to cover 300 square miles, to be built. Northrop was chosen over Motorola after both companies completed a 6 month, $2.7 million test of their systems in lower Manhattan.

The system could be used for purposes such as letting police get a mugshot of a suspect they are chasing, letting fire chiefs map the locations of their vehicles during an emergency, and even to check water meters or change traffic light patterns to ease congestion.