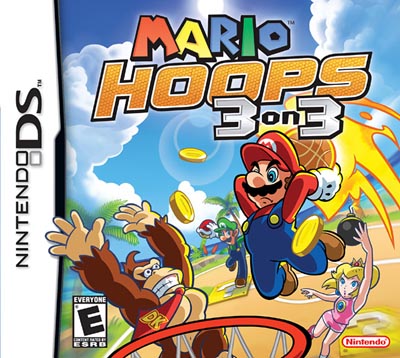 Mario isn’t just a plumber. When he has a little bit of free time, he can hit up the pitch and play some soccer – in Super Mario Strikers, smash a winner down the line in Mario Power Tennis, and even smack a homerun in Mario Superstar Baseball. His latest adventure gets him hitting up the hardcourt in Mario Hoops 3-on-3 for the Nintendo DS. Too bad it’s not exactly a slam dunk.

The control scheme, as you would probably expect, makes a lot of use of the touchscreen. This unconventional gaming interface takes a little getting used to — it’s not uncommong to accidentally shoot the ball when you want to pass — but the training mode brings you up to speed quite well.

Of course, there are plenty of items to use (just like every other Mario title), so feel free to chuck turtle shells and slip on banana peels. What’s strangest about this game, however, is that each basket is not worth the same value. You dribble the ball on the question marks, accumulate coins, and then make a shot worth that many coins. In this way, typical scores are something like 830-654. Not exactly what you’d find in the NBA.

In the end, the concept is good, but it’s not implemented as well as it could have. The next Mario Kart this is not.