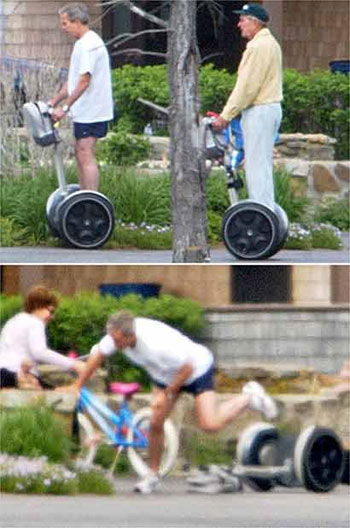 You look a tad bit silly motoring around on a Segway anyway, but you look even more silly falling off of one. The makers obviously don’t want you to look silly, because they have recalled 23,500 Segways to fix a glitch in the software. Apparently the problem is that the Segways can spontaneously apply reverse torque to the wheels (go in reverse, in other words) when the user is leaning forward and expecting to go forward. There have been six reports of head and wrist injuries from the problems so far. The fix is just a simple software update which can be done at the dealer you purchased it from.

23,500 Segways is, not coincidentally, all of the Segways that have been sold. This is the second time that the makers have had to recall all of their machines. In 2003 they recalled all 6,000 that had been made then because they were falling over.