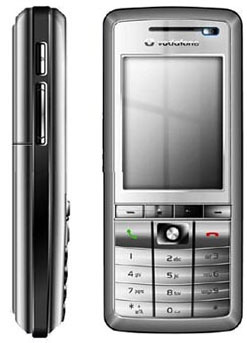 It may not look like much, but don’t let its outward appearance fool you: there’s more here than meets the eye. The simple silver exterior has a certain understated elegance to it, but when you need to get a little work done, the 3G-ready Vodafone V1210 appears to be more than ready to tackle just about any task. Well, other than taking pictures, because despite its otherwise decent spec sheet, there is no camera to be found.

It’s a little unfortunate that the Bluetooth under this hood is just the 1.2 variety, so don’t expect lightning quick data transfers here. The rest of the features are thus: tri-band 3G, 300MHz Intel processor, 2.2-inch QVGA display, 128MB ROM, and 64 MB RAM. I guess you could say the V1210 is simple, yet functional.

When I spoke to the Oracle, she hinted to me that I could expect the Vodafone V1210 to hit market next month, but refused to tell me the price. Blah, you know how cryptic she can be sometimes.