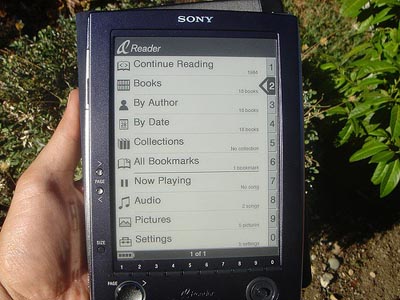 If Amazon’s Kindle didn’t tickle your fancy, and you’d rather get something made and marketed by a “real” electronics company, then I guess it wouldn’t be all that bad an idea to go to the same people who are known for the Walkman line of portable entertainment. The lucky saps over at MAKE got their hands on an advance version of the Sony Reader, and it looks pretty impressive. Sure, it’s black and white and doesn’t sport any kind of flashy chrome, but e-ink sure beats the regular paper stuff.

We’ve had to suffer through some delays, but it seems that the Sony Reader is almost ready for market, given that MAKE is taking one on the road this week.

If you get tired of reading plain text and greyscale pics, the Sony Reader — which appears to be roughly the same size as a paperback novel, only thinner — can also pump out MP3 and AAC music files.