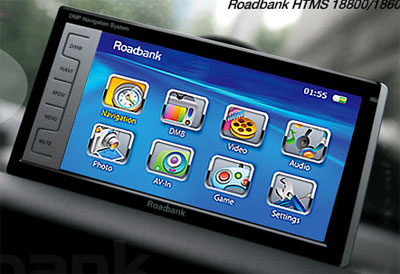 RoadBank plans to include T-DMB reception and more in their HTMS 18800. As with most gadgets coming out of Korea, the RoadBank HTMS 18800 is a super slim solution, measuring just 23mm thick, even with the battery slugged on.

Sporting the latest SiRF Star III chipset and Mando maps, it is said to provide “realistic views of roads and buildings.” If you’re driving around familiar territory and have no need to decipher a map, you’ll be able to get some entertainment functionality: MP3 player and image viewer, as well as some included games (but a Nintendo DS, this is not). Video support is also quite good, with RoadBank showing love for H.264, WMV9, MPEG1/2/4, DivX, and XviD.