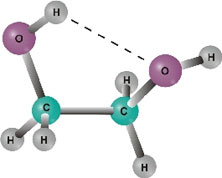 Fuel cells may yet hold the key to longer life for portable devices.

A group of scientists at Arizona State University have come up with a way to make better fuel cells, using … antifreeze. Seems that the results of combining a certain chemical in antifreeze with sodium borohydride can produce a longer-lasting fuel cell.

That sodium borohydride is a liquid that is used to store hydrogen, that same one-proton element that can power—you guessed it—fuel cells. The scientists say that they can achieve fuel cells that power a laptop for twice as long as existing batteries.

This kind of fuel cell is very small, which is appealing to laptop and mobile phone makers, as are the magic words not flammable or explosive.

The scientists aren’t at the mass production stage, although they do have a sort of prototype that gives them confidence of making the real thing soon.

The antifreeze connection, by the way, comes in the form of ethylene glycol, which is used in antifreeze but also used in these fuel cells to help dissolve boron oxide, a byproduct of the hydrolysis necessary to create the fuel cells.