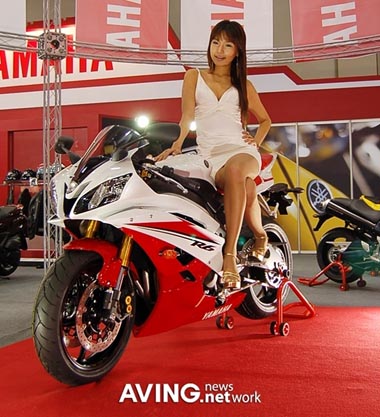 “Do you come with the bike?”

Okay, maybe that was a little too awkward a reference to The Simpsons, but it’s the first thing that came to mind when I saw these photos. It seems to be popular practice in both Korea and Japan to have an abundance of booth babes at just about every convention (I suppose we do the same on our side of the Pacific as well), and KIMOS 2006 is absolutely no different.

Here we see a lovely model sitting atop another model, but it’s the one on the bottom that should be capturing your interest. It’s the Yamaha YZF R6, a two-wheeler that’s being touted as the “best of the 600cc displacement super sports motorcycles.”

I guess when you can fire up the engine and rip down the drag strip at speeds of up to 285km/h (177mph), you could make that claim, especially considering that you have just a touch over a litre of displacement. Yakuza getaways couldn’t be easier.