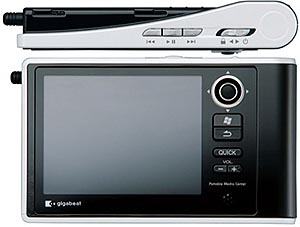 The Toshiba Gigabeat V30T has been kicking around the streets of Asia for some time now, and in usual fashion, it has yet to wash up upon our North American shores. We had to wait a few months, but it seems that we’re going to get our grubby little hands on some Toshiba PMPness, albeit it’s the lesser brother of the DMB-playing V30T. Pre-orders are now available for the DMB-less Gigabeat V30.

It’s lost its T because there’s no TV. Other than that, the features are much the same as its Asian counterpart, including a 30GB hard drive, 3.5-inch QVGA (320 x 240) display, built-in FM tuner, TV-out, integrated speakers, and PMC interface by Microsoft. It’ll tackle a good variety of audio and video formats, including WMA Lossless.

With so much competition in this market, I would have hoped for a better resolution, or at least a wide-aspect screen. At least you get 8 hours of video (30 hours of audio) on a single charge, so that’d be enough to get you through your 9-to-5.

Pre-orders are being taken at Amazon for $400, with availability listed as “in stock soon.”