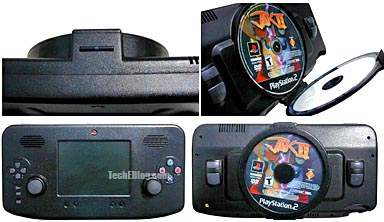 You could probably equate the Game Boy Advance with being a portable Super Nintendo and the DS with being a portable N64. Sony wants you to pick up a PSP, thinking it’s just as good as having a PlayStation 2, except that you can take all that Grand Theft Auto action with you on the road. Well, the PalmPS2, as its name implies, is a truer version of what a portable PS2 should be: it actually has a built-in DVD drive (rather than those not-so-pleasant UMDs).

Don’t go rushing out to your local Electronics Boutique just yet; this isn’t a retail product. Instead, it’s yet another one of those “here’s a geek with too much time on his hands, so he has to make something cool for us to go ‘wow, that’s cool'” kind of moments. Brian Gardiner “tried to use as many parts from the PS2 as possible.” You’ll find a number of original Sony parts in there, including the springs, buttons, and even the “PS” logo from the front of the PS2 case.

The 5-inch LCD display is bigger than the PSP’s, the Palm PS2 has got stereo speakers, and there even appears to be a memory card slot to save your game progress. No fingerprint-magnetizing glossy black exterior, though.