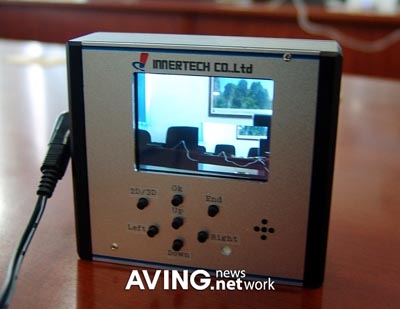 As watching video on portable devices becomes more popular, their displays are continually improving. Today, we make another step in the right direction as Innertech has announced its newly developed 3D module, designed specifically with “dynamic 3D” video watching in mind.

The module is being demonstrated in a PMP with a 4.3-inch display, and on a sample level only, it looks like it’s doing its job. They’re saying that this 3D solution will provide “clear screen quality with enhanced brightness compared with the company’s previous one.” With the extra brightness, you’ll have no trouble enjoying your vids even during the sunniest of days.

There’s even talk of implementing the 3D module into mobile phones, as Innertech has had some “discussion” with a few notable phonemakers (who they fail to mention). They do remind us, however, that this 3D module is very versatile and can be applied to any number of portable devices, from cell phones and smartphones to portable GPS navigators and MP4 players.