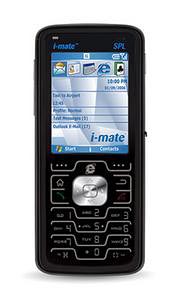 Want a powerful smartphone without the extra bulk? Want something that runs on Windows Mobile 5.0, but looks more like a fashionphone than one you’d use for business? Maybe you should consider the I-Mate SPL, a slim candybar that bears a little too much of a resemblance to a certain Moto handset.

Now, I shouldn’t say that the SPL imitates the SLVR, per se, because besides their outward appearance, there really isn’t all that much that these phones have in common. The SPL is probably the more powerful of the two, based on its WinMo5 platform alone. The display isn’t gi-normous at only 2.2-inches of 65k color goodness, but that’s the price you pay for having such a portable smartphone.

You’ll find Bluetooth on board naturally, as well as 128MB ROM, 64MB RAM, and a miniSD memory card slot. There’s no mention of a camera, not even a blurtastic VGA one. Either way, they haven’t said how much it’ll cost or when they’re shipping, so we’ll just have to wait and see.