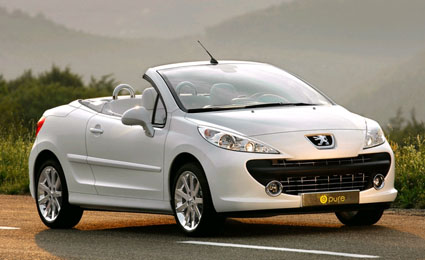 Citroen is planning a dual hybrid model that it hopes will have its competitors seeing green.

Planned is the 207 Epure couple and cabriolet hybrid. That’s the first hybrid, the combination of models. (And you can tell by looking at the photo that it’s intended to be a convertible.)

The second hybrid is the more environmentally friendly one, the fuel-cell hybrid that uses a fuel-cell stack called GENEPAC, which was developed in part by the French Atomic Energy Commission.

That GENEPAC powers an electric motor that boasts a full 40 kilowatts of power and 133 pound-feet of torque. That all adds up to a top speed of 81 miles and top range of 218 miles before recharge.

Even more interesting is the five-cylinder setup. Each 15-liter cylinder holds 3 kg of gaseous hydrogen, which is compressed to 700 bar.

Sporty and green don’t have to be mutually exclusive. Look for the Epure at the Paris Motor Show this fall.