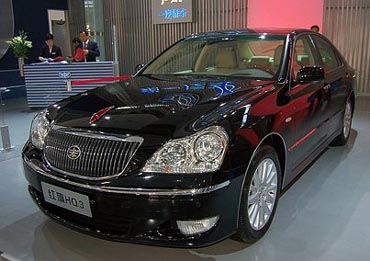 Whether you’re too tired, too drunk, or just too lazy, sometimes you just don’t feel like driving. That’s when you’d want this modified version of the Hongqi HQ3, because this is a car that can drive itself. I’m assuming that it has some form of GPS navigation in place so that it will actually drive you in the right direction (they make no mention of it), but they did tell us that it knows to stop at intersections, make well-executed turns (better than your average 16-year-old, I would hope), and stay between the lines.

I’m curious, though, whether it has any accident prevention solution in place. You know, for when you’re happily cruising along the Interstate only to have some idiot cut you off unexpectedly. If you were behind the wheel (and in control), you would probably do some kind of evasive manuever, slam on the brakes, or otherwise try to do something to prevent a possibly fatal fender bender. Would the self-driving HQ3 do the same?

Although they’ve capped the car’s top speed at 37mph, the company is claiming that it’ll go more than 90mph “before becoming confused.” I don’t think you can legally drive on any streets at that speed anyways (in North America, at least).