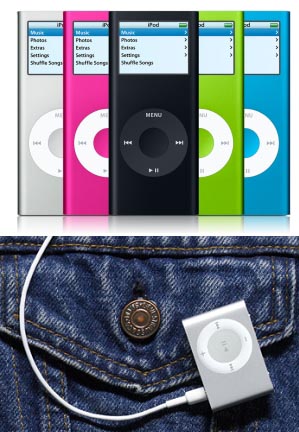 Any time Steve Jobs organizes an event and walks up onto the stage, it’s a pretty big deal. We have an awful lot of Apple fanboys kicking around on the internet, and as a result, there are a lot of unconfirmed rumours on a fairly regular basis. It doesn’t help that the produce-named company stays pretty hush-hush about everything that they do, building up to events like this morning’s. It’s Showtime, and we’ve got some new players coming down the chute (and some upgrades to iTunes as well).

Steve Jobs announced a number of “remastered” iPods today, including upgraded iPod Videos, larger capacity Nanos stuffed into aluminium packages, and the world’s smallest MP3 player in the form of the 2G Shuffle. Oh, and the iTunes Music Store sells movies now too.

iPod Video
We didn’t get the “true” video iPod that we were hoping for. Nope, there’s no touchscreen or virtual click wheel. The new (5.5G?) iPod Video looks just like the 5G version that we’ve had for some time, except they’ve thrown in a few notable updates. As if the screens weren’t already bright enough, they want to burn your cornea with an extra 60% of luminescence. Thankfully, they’ve included brightness control as well, so feel free to dial it down a notch or three.

The new iPod also features “gapless” playback, helping you play one song after another without that horrid dead air in between. You’ll probably spend more time watching movies and playing music on this thing, but Stevie-boy also has a slew of new iPod-ready games for you as well — Bejeweled, Cubis 2, Mahjong, Pac-Man, Tetris, Mini Golf, Texas Hold ’em, Vortex, and Zuma — all of which are available right now through the iTMS for $4.99 a pop.

The most notable changes, however, come in the form of a new capacity and new prices.

2G iPod Nano
The Nano is easily the most popular player in Apple’s line-up, mostly because of its super slim form factor and relatively good capacity. If that’s what interested you in the Nano in the first place, then you’ll be ecstatic to hear that they are upgrading it on both of those fronts. The 2G Nano is even slimmer than its predecessor (if you can imagine that), and they’re doubling up the storage space without charging you anything extra. Battery life is now 24 hours, and the screen is 40% brighter.

One of the primary complaints of the old Nano is that it got scratched far too easily. Well, it seems that Apple has taken two steps forward (more capacity, slimmer form factor), and one step back. They’ve shoved the new Nano into an aluminium body, one that bears a striking resemblance to what we once saw on the iPod mini. In fact, they’re offering the 4GB version (now in the middle of the range) in the same colors — silver, black, green, blue, and pink — with the 2GB and 8GB coming only in silver and black, respectively.

New Shuffle: “World’s smallest”
The forgotten sibling known as the Shuffle even received much love today as its younger sister, the 2G Shuffle was unveiled unto the hoards of tech-loving press. With a built-in clip for easy portability, the new Shuffle is being touted as the world’s smallest MP3 player. It’s as small as an iPod FM remote, so it’s pretty darn tiny. Like its Nano cousins, the Shuffle is now housed in an aluminium body as well. Best of all, it’s dirt cheap at just $79 for the one-gigger (only one capacity is available). Look for it in October.

iTunes Movie Store
No big surprise here. Legal downloads from Apple has now expanded into movies, and they are available as of right now. They have 75 movies at launch from a number of studios, including Pixar, Touchstone, and Miramax. They’ll have some el-cheapo flicks for $9.99, but prices for the newer stuff will be $14.99. You’ll get “near DVD quality” and Dolby audio; it’s still not exactly the best at 640 x 480, but at least that resolution is watch-able on a computer screen or a smaller TV.